This is a very cool and underrated offering from the king of nasty vintage fuzz. This one is Kent branded but has the shin-ei stamp inside. It is widely known that the wah in these is less than desired. This is definitely not a funk machine and you will not channel your inner Hendrix here, but the fuzz really makes up for it. These are 2 transistors short of being an exact superfuzz circuit (TR-8) and in my opinion lie somewhere between the fy-2 and the fy-6.

It has 2 knobs for volume and fuzz adjust, as well as a fuzz tone selector switch that changes from hard to soft. Very much like the superfuzz it basically goes from a scooped, darker sounding tone (soft) to a cutting midrange sound (hard). It also has 2 stomp switches, one of which will turn the fuzz on or off. And one that works just like a standard wah would, employed by the treadle.

I got this pedal for (what I would call) a steal, and these (non-superfuzz) versions can be had for very cheap on ebay or the forums. They are well worth it in my opinion, even though this version is known for a severe volume drop and doesn't meet unity gain in most situations (very much like the fy-2) it sounds really great. This is the chainsaw fuzz your friends warned you about, to me its like the superfuzz without the octave up. I'm glad I chose not to follow the hype and took a chance on this one.

This is supposedly the fuzz tone used by Jesus and the Mary Chain back in the day on Psychocandy. 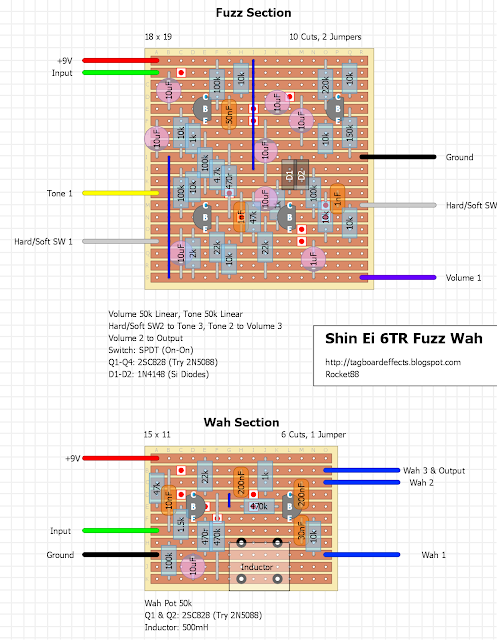 Quick note about the wiring. The fuzz comes before the wah, so you'll wire it up according to the dual effect wiring as shown in the offboard wiring tab. You'll notice instead of making this on 1 massive board I opted for 2 separate boards. This will give you more options for placement in an enclosure, by preventing it from being 1 massive board.
Posted by Zach at 01:50