Came across a schematic for this awhile ago as it seemed interesting. It's supposed to be a fairly rare overdrive pedal fetching up to $500. Here's some information I found about it:

The rare 1980s Bartolini tube-it Distortion Overdrive pedal made in Livermore, California, USA. Makes any amp sound like a Marshall. This may be the only pedal Bartolini ever made. Three position switch for more or less overdrive -- plus treble, bass, sustain and output controls.

It was designed to emulate the distortion characteristics of an early 80s Marshall JCM-800. Probably made in the mid 80's. Three way boost switch unloads tons of gain from mild to overkill. The circuit is set in a giant block of epoxy so there are no clones or schematics available.

Does anything from smooth, cleaner OD to straight up blistering, sustaining lead tones. Has the three way boost for different tone styles. Can do TS-9, Marshall, or its own thing all together. Controls include bass, treble, sustain , and output.

Whip the bottom off the tube-it and inside there's a little trim pot for adjusting the sound to be bit more, or less present. All models may not have this option. The trim is a small plastic wheel (see photo in the Disqus section) similar to the color to the exterior paint job.

Some of the tube-its were said to be mercilessly treble boosted. The pedal can get a sound like a healthy Tube Screamer in the first position. Now up the boost one notch, to add a little more drive, and fullness.

Perfect for lower output pickups. Need some grind? Just flip the boost switch to position three. It's at least double the increase in gain, as between positions one and two. The circuit is now presenting significant drive, and a fuller, slightly distorted tone. Let's not forget the absence of tone suckage when it's not kicked in. A very fine, versatile pedal.

The only thing I changed was make the high low switch 2 different switches so you can control each one independently. 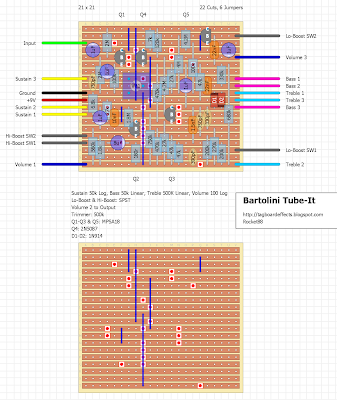