One last one, for tonight.

well, i came up with another dirt pedal the other day.  lately, i've been experimenting with mixing different types of transistors together to achieve new tones, and this one kind of  takes that idea to the extreme.  it's designed under the premise that the stages increase in breakup as it goes along in the circuit, but instead of using stages that increase in gain, different types of transistors are used that exceedingly distort as the the circuit progresses.  for instance, the first gain stage is a silicon BJT.  this is used to get a decent push going and a very slight amount of drive.  next, is a MOSFET transistor, which like to distort a little easier, and in a bit more pleasing and richer way than the previous Si transistor.  finally, there is a germanium stage, which of course loves to distort in a very full and heavy overdrive, especially when driven by the previous gain stages.  the result is a very clear, yet complex crunch, that has a very nice character to it.  to round things out, in the beginning of the circuit is a JFET buffer, which helps to increase the current, and gives a nice high input impedance for the guitar pickup to see.  so in the end there is a total of 4 different types of transistors, each of which i tried to use to their optimum potential.  hence the name, the Four Horsemen Overdrive.

the tone control is a variation on the SWTC, but it has an added pole for a steeper rolloff.  the frequency point where the curve begins is rather high, so it is really more like a presence control- just taming the highest of frequencies, keeping the basic tone intact. 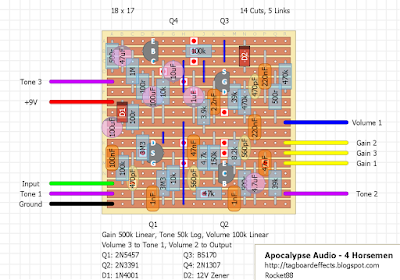