Here's a pedal that caught my eye while looking for a new fuzz. It was made by an Italian company in 68.

It's very Big Muff like in tone, but seems to have a bit more clarity in the notes, and no Fuzz control, just Bass, Treble, and Volume. In my search for the schematic I found that over time there's been 3 different versions, so I made a layout for each, and then found that a few years ago by Miro actually made a layout for the later version. My layouts are a bit more compact, has less cuts & jumpers, and I put the CLR for the LED on the board, so I thought I would still post all of them, since while they have the same feel, each sounds a bit different.

Also, through my searching I found some mods people have done, and made a massively modded layout as well that I'll post later with a description of it all.


The video compares the stock vintage unit to a clone made by Brad at Creepy Fingers. Not sure what the extra pot does, but since it's full CW I can only assume it's a Fuzz Pot. 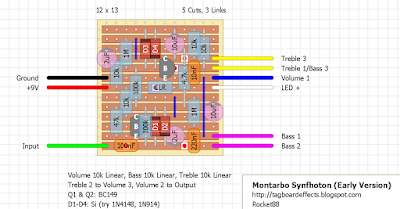 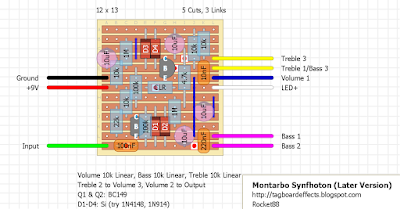 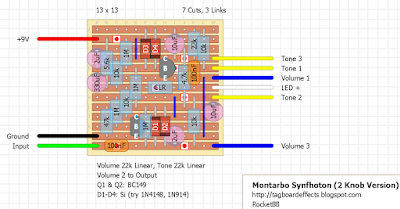