The Supreme has all of the sounds and abilities of the Standard and Primitive Pharaohs, but with some very useful additions and a bit of a twist.
In place of the hi/lo switch,the Supreme utilizes a variable pre input control to infinitely adjust the saturation of the front end of the circuit from 1 to 10. In Place of the 3 way diode selector, the Supreme utilizes a 6 way rotary switch to select from the Standard Pharaoh diode settings, plus an additional 3 setting not available on the previous Pharaohs. The Pharaoh supreme allows selection from the following diode settings: Germanium, Asymmetrical Germanium(standard Pharaoh), Silicon (standard Pharaoh), Mosfet,LED and Bypass (standard Pharaoh).

The Pre knob control in addition to the Clip knob, produce an array of sounds and textures that expand the Pharaoh into the ultimate, or Supreme fuzz-stortion that Black Arts has produced. 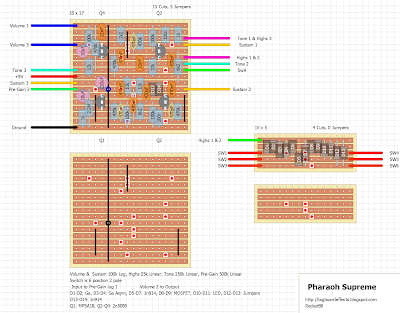 A second layout for this effect, sorta requested, so i made a few modifications to the original layout posted. This once adds another space for the 2nd Ge diode for the asymmetrical clipping, and replaces to last clipping sockets with a single jumper, which should be there anyways. If you want to play with the clipping arrangements instead of the stock, use the clipping board in the first layout. 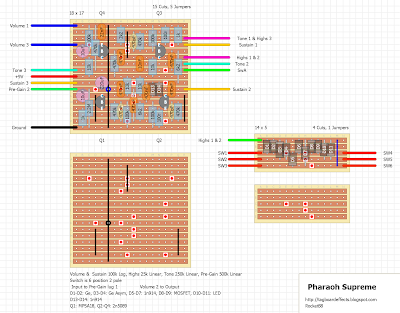