The Idiot Wah is a simple building block Bridged/Twin T filter giving a resonant low pass response. It's specifically designed for electric guitar, for simplicity and useability, making it a bit different from similar designs.  The input resistor helps the input from loading down and attenuates the input signal.  The Darlington transistor has enough gain to keep the output at about unity.  Biasing helps keep the distortion down. And most unusual, the unequal capacitors in the T network give a more useful, more musical range than the typical matched values.

VR can be a pot, an LDR, or any type of variable resistive element. Being a resistor to ground allows many different schemes to be used to control the cutoff frequency for the filter.

A quick example of the idiot wah being controlled via an LDR rather than a pot: 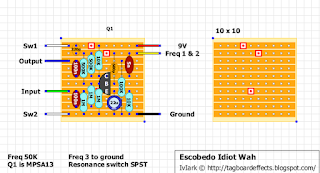