Here's something quite interesting. A switch to toggle between TubeScreamer-like, and a Rat-like mode. Basically this could be the basic tool, think swiss army knife, of overdrives and distortions. I omitted the in/out buffers from the layout, but used the original JFET pinout. 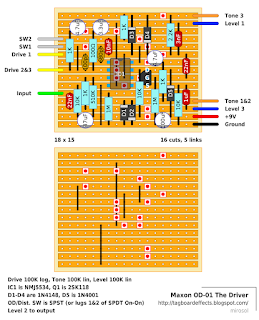 I built the layout, and noticed that with my batch of NE5534s i got lots of squeels in distortion (rat) mode when tone and gain were set high. So i checked it around and noticed that NE5534 do have both, balance and compensation. So i added 3n3 cap for compensation and it worked great - much closer to the demo than with the original one. While i started modding it, i changed tone pot value for 50K linear, as the original 100K's first half was just dull and muddy. Also i think linear taper on the gain pot gives much better feel to it. I must admit that this is very good and versatile circuit. Some of these days i'm going to build two of these and put them in the same box with stomp switches for Dist/ODs as well. Recommended build indeed. So. Here's the modded layout: 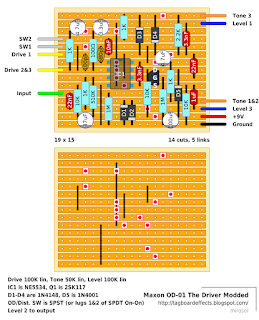