From an older thread on FSB and DIYSB about using two pairs of piggybacked silicon transistors to have control over the gain.  To paraphrase, these were the main points:

Someone mentioned using a 200K trimmer but I suspect that would be too high and that a 20K trimmer would probably be fine with most common transistors, allowing better resolution in fine tuning the gain.

The basic idea is that altering the resistance between the two emitters using a trimmer allows you to control the gain of the transistor pair, which lets you fine tune an effect to get the sweet spot of gain every time.

This could be used on any of the classic germanium effects, but I thought I'd try it first with a Fuzz Face to see what the results would be like.


How does it sound? ...IMHO with the right resistor it sounds much better than Ge's, stays tight in the low end where Ge's start to mush-out, much less noise (hiss) and you get away from that temperature problem the Ge's have.

To find the right resistor for your two transistors temporarily install a 200k trimmer where the resistor goes, plug in your unit and play a playing volume (not bedroom levels) and dial in the trimmer untill you arrive at where you bet the best sound, remove the trimmers and install resistors.

I still have a small stash of AC128 and AC125 I got from a guy in the UK a few years ago (not selling any) I save for Ge builds that "must have" them, but IMHO the Bret-Piggyback thing sounds way better.

Give it a try and see what you think: 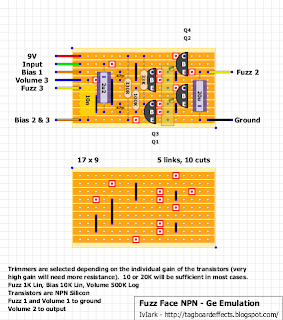 And if you want to include a filter cap, which may be a good idea considering how silicon Fuzz Faces can be prone to oscillation: 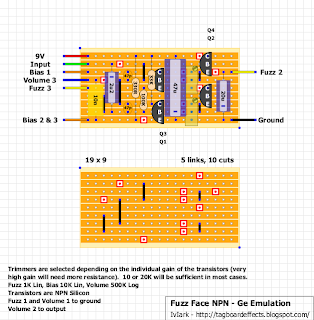