Information from the builder:

Unique to the Oxblood Distortion is it's ability to make a "large" amp sound "small" and in hyper-drive with the tone of the AC15. 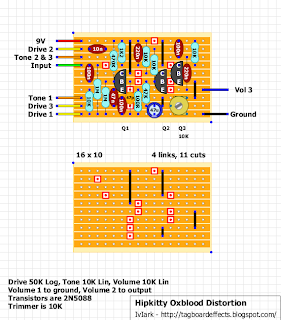 The schematic by WhiteKeyHole that I did this from (big thanks to him as usual for his great tracing) didn't include a supply filter cap, and so I did the layout above exactly as per the schematic.  If you want to include one then you can use the following layout.  I've used an axial cap because I have those to hand in that size, but you could use a radial cap if that's what you have available, and you could probably reduce the layout in width by a column if you do. 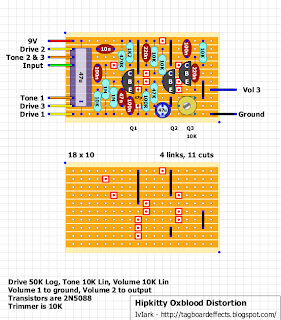 A couple of notes based on the FSB thread, if you want more volume then you could reduce the value of the 10K resistor at Q3 collector, for more bite reduce the 220n in the middle between row 1 and 4.  Maybe socket and experiment to fine tune it to your liking.
Posted by IvIark at 01:02