Klon killer?  Some people think so, but whatever it's certainly a great sounding overdrive.

Info about the original from Maxon:


While many consider the OD808 to be the greatest overdrive ever created, Maxon is not a company to rest on its laurels. Instead of basking in the glowing praise, Maxon has focused on the user's feedback to come up with an all-new overdrive circuit that addresses the key shortcomings of other units - the result is the OD-820 Overdrive Pro.

One of the key ingredients to the OD-820's amazing sound lies in its power section. While the OD-820 accepts 9 volts coming in, it then uses a DC-DC voltage converter (#MAX1044) to bump this up to 18 volts. This higher voltage allows for a more accurate, full-frequency reproduction of the input signal than other units can provide. This higher voltage also allows for more balanced powering of the circuit, providing stabilized positive and negative DC voltage to the overdrive, blend, and tone sections of the circuit.

Like the OD808, the OD-820 distorts signal in the amplifier section of the circuit rather than having a separate clipping stage, which provides a smoother, more realistic tube-like overdrive than other methods. The higher voltage supplied to the amplifier section provides slightly more clipping than the OD808 or OD-9. The OD-820 uses only JRC4558 op amps for the warmest overdrive tone possible.

And a version using a modified gain pot arrangement (described in the comments below), using two independent pots for the gain control, now labelled Gain and Clean and put together by John.  Increasing the Gain pot to 500K will give you quite a bit more dirt out of this version. 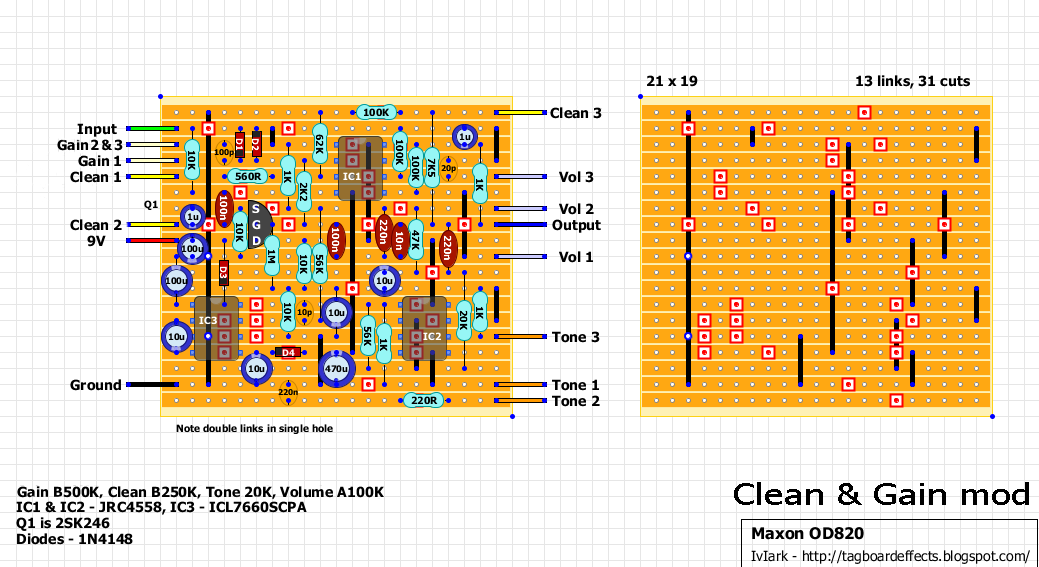