Came across this the other day and since I'm in the mist of finals I figured it would be a nice way to get my head away from my work and relax. Basically this is just a modified Ross Distortion, but has enough differences that I feel warrant a layout of its own, plus not sure how may people have seen it before.

In the end you can try different diodes and Dual Opamps and see what you like best. I know I'm not the only one that's a big fan of the DOD250/MXR Dist+/Ross Distortion for it's great tone, simplicity, and the ease at which it can be tweak to your liking. 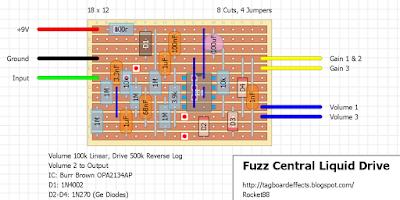