The Wizard is a new distortion pedal, inspired by Tony Iommi's guitar sound on the early Black Sabbath albums. It is well known that he used a modified Rangemaster to drive his amps, so the same principle was used for The Wizard. The first gain stage is essentially a Rangemaster, using a germanium transistor, but tweaked for a full range boost. That drives a distortion circuit which has been designed to give something of the tone and feel of a Laney Supergroup amp. Obviously, there is no substitute for a full stack at volume, but The Wizard has a similar distortion character and responds well to picking dynamics. 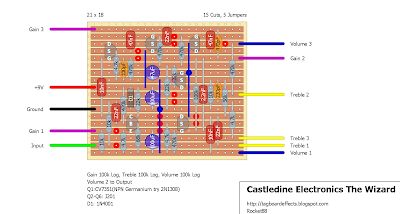