THE COLORSOUND SUPA TONEBENDER - By 1973 Sola was using the Colorsound brand on its pedals, now built in wider "jumbo" sized enclosures. The Tone Bender was upgraded and moved into this new enclosure. The Colorsound Supa Tonebender (pronounced Super) featured a new Silicon transistor circuit that had no relationship to the previous Germanium transistor Tone Bender circuit at all. This new circuit was essentially a knockoff of the Electro-Harmonix four-transistor Big Muff circuit, specifically a 1973 era Big Muff, now known as the violet Ram's Head. Sonically these sound very different to a typical Big Muff due to one minor change - the removal of the coupling caps and clipping diodes in the first clipping stage. This made for a very loud, in your face Big Muff sound. I have an early circuit board in my Supa that actually includes through holes in the first clipping stage for the missing cap and diodes, indicating Sola intended to originally make a straight clone of a violet Big Muff, or possibly had plans to do so later, but it does not appear any were made with the complete components. There is also an extra .1µF cap in the tone section and an extra capacitor added to the 9v for power filtering, not found on the original violet BMP circuits. 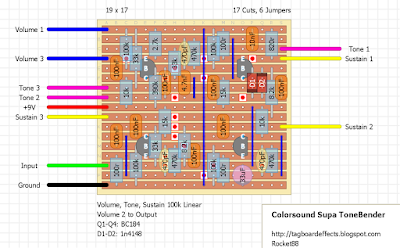 I'm sure you can use pretty much any common Si transistor in this one, so you don't really need to hunt down BC184's. Verified using 2N5088 transistors