Thanks to Miro for the excellent trace job he did on this.

Hope you're stocked up on 470nF caps.  They were all polarised but I have shown poly for the caps with a 5mm pitch because I expect that is what most people will use.  I have shown electrolytics for the two with only a 2.5mm pitch just so people know the polarity if anyone would like to build it with electrolytics, but again I expect most would use poly or maybe 2.5mm multilayer ceramics for them.  Any PNP germanium can obviously be used an an alternative to the NKT275, and I suspect more people will have 2N3906's in stock than 2N5087's, so try those for Q2 and Q3.

Info about the original:
Classic '60s Germanium transistor overdrive and more. In addition to a Gain control, the Electro-Harmonix Germanium OD allows the user to control Bias for attack and the circuit Volts for that sweet spot found when a battery's voltage dips. Dial up that slightly torn speaker sound OR dial in total Germanium "Satisfaction."

Germanium is an element like carbon or gold. Germanium transistors were used extensively back in the 1950s and ‘60s. Eventually they were replaced by components that were considered “better.”  The EHX Germanium OD and Germanium 4 Big Muff Pi use these old school transistors. They have a distinctive sound, some say smoother or “spongier.” You be the judge, hear the Germanium OD here. 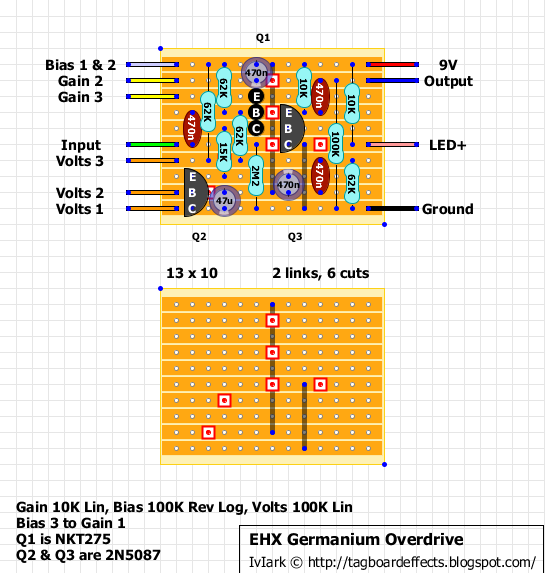 Thanks to ξεναγός νεκρόπολης for verifying and providing the following working voltages.