Since we're having a streak of big boards... :) Guess i'm getting old too since it's been over 15 years since this appeared on the marked.. This layout is without the input, output and switching buffers. Should still go nicely in B box. The transistors were 2SC1815GR on the original, but i've tweaked the layout to accept more commonly used pinouts. If you want to use the original ones, just mind the pinout. There's room to get the BCE transistors in neatly. But you should be golden with any NPN, like 2N5088, 2N3904, BC549 or BC550.

Fab distortion from the Tube Pioneers. 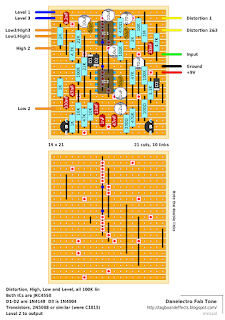