Info from Analog Mike about his silicon original:

We have some BC108 and BC183 silicon transistors, and have been making silicon Sunfaces for several years now. The BC108 are in small metal cans while the BC183 are plastic. Silicon fuzzfaces came out in about 1969. Dallas Arbiter used both of these types in their Fuzz Face pedals. The silicons are fuzzier than the germaniums, and brighter. The silicon transistors have much higher gain. They don't get totally clean by turning the guitar down like the NKTs but they do clean up quite a bit and are sensitive to your dynamics. Check out the sound sample below to hear this.

We can make a SUNFACE with no extra charge for silicon. There is a small extra charge for modifying and converting an existing germanium fuzz pedal to silicon. The sundial is not really needed, as the silicon transistors are not temperature sensitive. But you can use the sundial knob to dial in different sounds if desired. We do put the BIAS trimpot on the inside of the two-knob sunfaces so you can still tweak it if desired. The Sundial knob may cause more noise on a silicon (high gain) sunface, due to the extra wires, so it may be best to not order the sundial if you want to keep the noise down.

Silicon fuzzfaces are negative ground, so you can use almost any power supply without fear of melting it down. But it still may sound better with an old style battery. The FUZZ knob on the silicon version usually sounds and works best if you turn it down a bit (on the germanium I usually like it up full).

The BC183 transistors we got in 2011 are my favorite for a silicon fuzzface. They are a little warmer than the BC108 and still have plenty of fuzz. We got a large box of these, each individually hermetically sealed in a foil pack, with the same paint stripes on the back that they used in the original 1969 Fuzz face pedals. I think Eric Johnson has BC183 in the red fuzzface that he used for years, and the new 2012 Dunlop Eric Johnson signature Fuzz Face seems to use these too.

Jon Carin (Floyd, The Who, Roger Waters, etc) contacted me in 2012, looking for a fuzz that sounds like the giant lap steel on One Of These Days by the Floyd. I recommended the BC183 Sun Face for him and I think he likes it!

I'd probably suggest using a 10K for the Sundial.  5K + 2K2 doesn't even equal the usual resistor in that position in a Fuzz Face (8K2) and so I think you want to give yourself a bit extra. 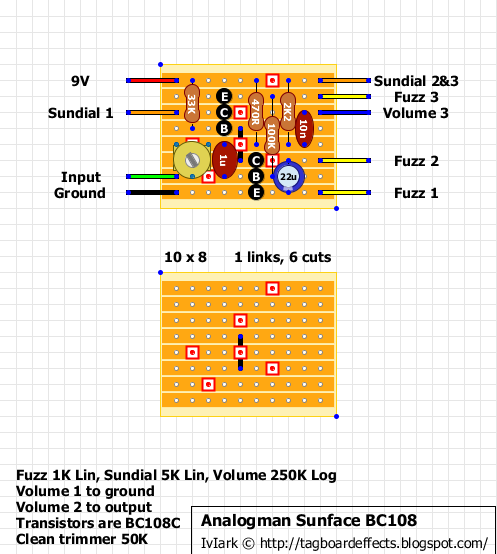