Something for you all (especially Miro!) to do with your low gain germaniums that you thought were going in the bin.  Info from mictester about his circuit:

I've got back to the work bench recently, and found that I had a lot of germanium diodes and transistors. Most of the transistors were very low gain rubbish, but all have that soft knee where they begin to conduct when used as diodes. They might not be particularly good transistors, but they're great for some things....

This Christmas, as usual, I'm going to ship a few pedals to a few friends as presents. This year's project is a slightly unusual one because it has germanium in it.... Usually, I hate germanium devices, but in this case, they give the pedal a sound all its own. It doesn't sound much like anything else out there, but you've already heard this on a few records!

Possible modifications include the addition of tone controls at the output end, changing the feedback resistors around the op-amps for more or less gain, rolling off the output by increasing the capacitor in parallel with the feedback resistor.at the final op-amp..... As usual, the circuit has a high input impedance and low output impedance, but has a solid copper bypass because that's what seems to be wanted again at the moment. 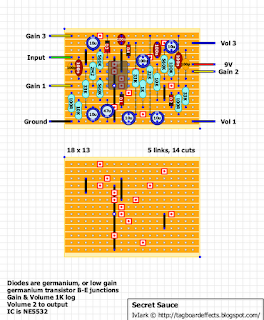