Designed my Merlin Blencowe and posted on the various DIY sites, this is how he described it:

For a long time I've felt guilty that my pedal board didn't include a compressor. Finally, after about a year of breadboarding, I have produced a circuit that can take on a Dynacomp and win, boasting:

Despite its final simplicity, I went though just about every possible configuration of OTA while chasing acceptable performance. As you can see from the schem, the OTA is working as a current-controlled resistor in the feedback loop of an opamp. This reduces the contribution of OTA noise.

The input signal is also coupled directly to the side chain, which consists of a precision rectifier (U1b) and precision current source (U2a) that dumps more current into the OTA control pin as the audio signal gets larger.

The ratio control blends compressed and uncompressed signals, so its variable from zero to infinite ratio (limiting)! 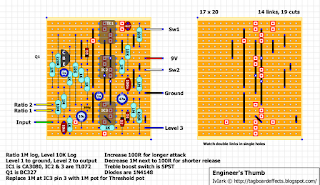