Lots of people have asked for this so here you go.  Rather than internal dip switches I've made the diode switching external using toggle switches for a bit more on-the-fly versatility.  For even more versatility make the switches 3 position centre off and put a set of your favourite diodes or LEDs across the other side of the poles to give you two choices in the flavour of the dirt from each switch.  The diodes are almost certainly going to be difficult to get hold of so I'd suggest experimenting and using your favoured combination in there rather than paying daft prices for something that probably won't sound any better than 1N4148s.  Switch 1 is TS type diodes in the feedback loop, Switch 2 enables shunted diodes similar to the Rat or Distortion + (except to vbias rather than ground).  You can request a high gain version of this pedal which I believe is just a 250K Drive pot instead of 100K so that's worth bearing in mind if you're using this as a basis for your own ideal pedal.

Info about the original if you want to wait 17 months to buy one:


Analog Man, in collaboration with Jim Weider, have come out with the pedal we have been looking for for many years - the King Of Tone (KoT). There are many overdrive pedals on the market, but none of them have been quite right, preserving the tone of the guitar and adding the right amount of overdrive without compromise. There are some good clean boosts available, but they just don't have enough drive to really give your amp the distortion you often want. There are some newer OD pedals that have a great frequency response, but to me they sound too DRY, sterile, and cardboardy. That is where the King Of Tone pedal comes in - it has enough warm overdrive but still preserves the tones of your quality guitars and amps.

Jim had been using an original TS-808 for well over 20 years, it's now housed in a 1980s TS9 case after Rick Danko stepped on it at a concert that THE BAND played. Jim likes the tone of his TS-808, but has always found it loses some low end and is a bit too heavy in the mids. I also love TS808s and have sold thousands of TS9s with our TS808 mods. But sometimes I have wished for a less compressed, more open and natural sound with more of the guitar's actual tone, or as Jim says "you can hear the note better". A Tube Screamer makes it easier to play and sound good due to the compression and vocal midrange boost, but a master player like Jim would often prefer less coloration to allow his techniques and superb tone to get through.

The King Of Tone overdrive was designed to take an amp at reasonable settings, and make it sound like it would sound if it were naturally driven to pure, smooth, tube distortion. It was fine tuned with Jim's 1960s Fender Deluxe Reverb amp to duplicate the sound when his amp is singing, but at lower volume settings - to simulate the natural tube amp distortion of preamp and power tubes. It does the same thing on other amps like Vox, Marshall, etc, making them sing in their own voice. Jim's amp was modified by our good friend the late Cesar Diaz, and is about the best sounding Fender amp I have heard. Later on, I tested the KoT on my own 1966 Deluxe Reverb amp. My amp is stock, and does not sound that great when it's cranked up. It gets loud but not very warm or singing, a little harsh. My amp sounds MUCH better using the KoT for overdrive, then it sounds very close to Jim's amp. 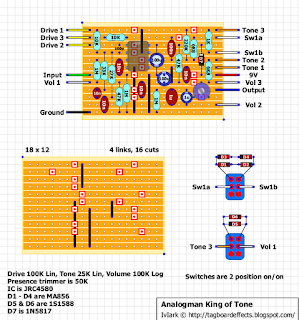 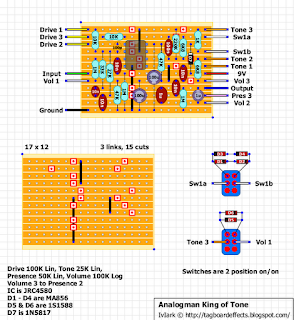 For those who want that little bit extra switching versatility.  This version has two separate volume pots which are switched by the second footswitch.  This is a nice feature which will allow you to have a rhythm and lead boost setting from the same pedal.  The extra switch (3) selects whether or not you want the feedback loop diodes being put in circuit when Volume A is selected (red channel) which can give you extra grit in the red channel if you want it, irrespective of the position of Switch 1. 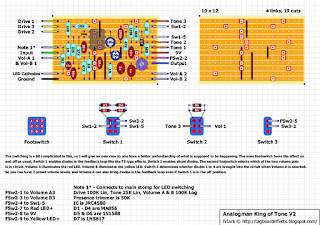 If you want to go the whole hog then V4 includes two complete circuits in one box with 3 pots each side and diode switching on internal dip switches.  You could make it with any combination of external switching you want, but this definitely has the potential for a 4 stomp switch, 6 switch, 8 pot monster if you include all the version 2 options twice.