Here's a version of the Clark Gainster for those who don't want to use the massive paper-in-oil caps in the version posted previously.  I only put in the large axial 100u cap because there was a bit of space in the bottom right of the layout and I had some that size.  You can obviously use a smaller radial cap here but there's no scope to further compact the layout because of the other components around it.  Still this will easily fit in a 1590B and so gives an option for a "Small Box" Gainster. 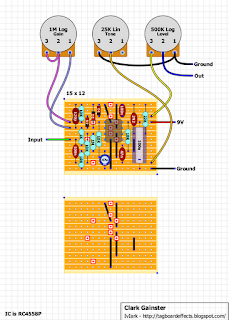