Interesting sounding 8-Bit fuzz, that's not typically my type of pedal that I thought will get some love. Schematic is posted over at DIYSB.

The Pixel is one of the earliest SHOE designs. It began as an oscillating fuzz and, after intentionally adding elements haphazardly and then adjusting the circuit so the pedal began to work again, it turned into something else entirely.
The Pixel is a gated fuzz and is commonly used on bass, though it works quite well on guitar and other instruments. When used with a guitar on single-note lines, the Pixel is adept at producing chiptune and analog or 8-bit synthesizer type sounds. It can resemble the sound of a classic monosynth or game console. This effect is most pronounced at higher PINCH settings.

By turning up the PINCH knob, you will create a stronger gating effect. Turn the control down and you will gain more and more sustain until the pedal ceases to be gated and can move into some slightly more traditional bass and guitar fuzz tones.

The Pixel is not, however, a pitch tracking effect as many synthesizer emulators are. As a result, you can move seamlessly into highly distorted chord playing simply by changing what you play.

Pixel on bass operates quite similarly, but bass notes will tend to have longer sustain when played through the Pixel. By adjusting the PINCH knob, you can also move between more open fuzz sounds or staccato synth-like tones. Because of its popularity with bass players, the current version of the Pixel features larger capacitor values at all stages to let your thunderous low end through.

The Pixel also features a Low Pass control which is very useful in dialing out upper harmonics. You can go from rather nasal to warm and fat with this control.

There’s also a new feature on the latest version. That is the Easy Mode/Hard Mode switch. This essentially lets you select from two different versions of the Pixel circuit. The Hard Mode setting is quite a bit louder than the Easy Mode setting, so be careful to turn down your volume before switching!

The Pixel definitely takes a bit of practice to grasp and you will likely need to adjust your playing style when playing it to achieve the best sounds. This is OK, though. Some SHOE pedals are intended to enhance your guitar and your existing playing. The Pixel is, more or less, a different instrument and you should approach it as such. With some creativity and the right mindset the experience is quite rewarding both sonically and creatively. Use this pedal to write new types of songs and go on new adventures!

Volume (Top Left): Sets the output level of the pedal

Easy Mode/Hard Mode (Toggle Switch): Use this to select between two different Pixel circuit versions. Hard Mode is a bit tougher to master (and much louder) but greatly expands the number of sounds available in the pedal (it’s based on the very first Pixel). Play with the Pinch and Input Level knobs to get a number of new synth-like sounds (Pinch all the way left and Input almost all the way up is a personal favorite). Easy Mode is a bit more forgiving and has a softer sound that can be tuned into a more traditional fuzz sound at low Pinch and Input Level settings.

Input Level Adjustment (Top Right): Used to adjust the level of signals coming into the pedal and can also be used to “clean up” harsher attacks due to its built in mild low pass.

Low Pass (Bottom Left): A simple tone control. Use it adjust how much treble is present in your output signal. This control will never cut your bass frequencies.

Pinch (Bottom Right): The heart of the pedal’s sound. Turn the pinch knob up for more staccato and synth-like sounds. Turn it down for longer sustain and less synth-like fuzz sounds. 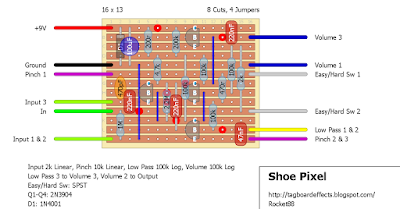