Ok. As the original layout for this circuit was originally drawn from a bad schematic and altered later, i thought it would be a good idea to redraw this from a trusted (Dirk Hendrik's) schematic with original buffering in tact. I also removed the old one from the archives... As this Rat adaptation shares the original board with LM7 and BS10, those are on their way too.

Info from the database:
A wide range of distortion sounds, a fat sound, and plenty of sustain characterize the Fat-Cat Distortion. Unlike typical overdrive units, when high gain settings are used, the fatness remains, allowing the FC10 to be equally effective on lead or rhythm guitar.

Like the TS10 and DS10, the FC10 gives extreme level boosts to incoming signals, creating an overdrive distortion effect. Enough gain is available to overdrive even weak signals, such as single-coil type guitars and low sustain/fest decay tones (bringing them up to a high sustain level).

To get the Fat-Cat "growling" distortion sound, turn the distortion control up high, while keeping the level control low enough to limit additional overdrive at the input of the amp. The tone control can be used to add harmonics for brightness and controlled feedback. High tone settings increase attack articulation, especially helpful on guitars with humbucking pickups. 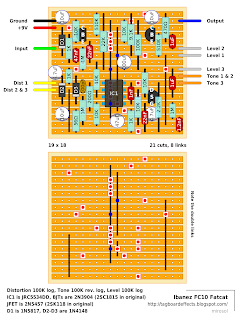