Next up in the MXR Custom Badass line is the Modified Overdrive—a classic overdrive circuit with modern modifications for improved performance and versatility.

For added flexibility, we’ve added a 100HZ cut and boost control that allows for a more focused EQ when cut, or a beefier tone when boosted. The Bump switch engages an alternate EQ voicing that boosts the lows and mids. Put it in front of the '78 Custom Badass Distortion for a slew of amp-like gain structures that won't mask your tone.

“My tone has never been better, and I ain't just sayin that. That Badass Overdrive is THE BEST distortion tone I’ve ever had. Its amazing!” - Nashville session ace Chuck Ward.


Couple of the values may seem a bit off, so use the closest ones you have, like 27n for stated 28n and so on. 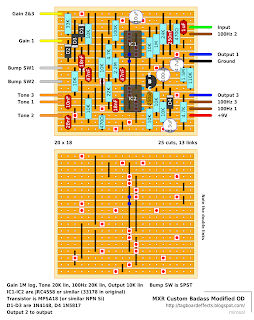