Info from Roger Mayer about the original 1985 version which this is based on:


The MONGOOSE FUZZ was developed in 1985 for guitarists who demand a guitar effect with lots of fat fuzz and enough bottom end to keep a metalhead happy. The MONGOOSE FUZZ also sounds as if it has a pre-set type wah voice that gives the distortion distinctive focus. It has proved popular with a wide and varied type of guitar player from Metal through Rock and Jazz. It is more modern sounding and civilised sounding than the Axis or Classic Fuzz and has found a niche with those who want an alternative but not too radically different sound that the current range of mass produced units from the USA, Japan and Far East produce.

Electronically the Mongooose uses a combination of both discrete and IC analogue design techniques. The clipping circuit primarily comes from a passive diode circuit resulting in smooth compression and harmonic overtones providing a smooth and transparent transition from clean to overload states. Chords sound very good and with the amazing amount of sustain available, feedback is possible at the lowest amplifier volume settings. These features have made the Mongoose popular in the recording studio and similar situations where feedback is desirable at low sound levels. Current users include Bono (U2) and Joe Perry (Aerosmith).


Video of the Mongoose and the Spitfire which I will be adding next: 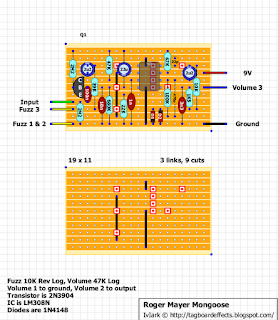