Original info:
The Hughes & Kettner Red Box Classic converts Line, Out and Speaker Out signals into balanced, frequen- cy-compensated signals, enabling a direct feed to a mixer. The Red Box Classic features two voicing options, a 4x12" cabinet and a 2x12" combo.
You can find the original manual PDF here (must read!)
Original schematic is available here.
You can use an adapter or the 48V Phantom power via Balanced Output jack. 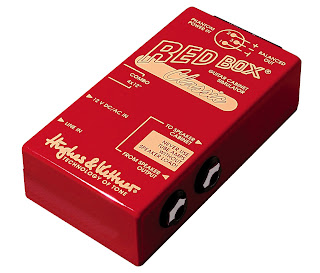 ...and without Ground Lift switch

Here is a great sounding Attack Delay / Noise Gate / Swell pedal.
I've used a more common LM13700 instead of LM3080.
You can find original project and scheamtic here.
I could not find any videos for this effect but there are some sound samples available here.
The original effect uses a momentary SPST footswitch.
I've also added an unverified true bypass version.
If you don't want the External Trigger just remove it and connect Thresh 1 to LM308 pin 2. 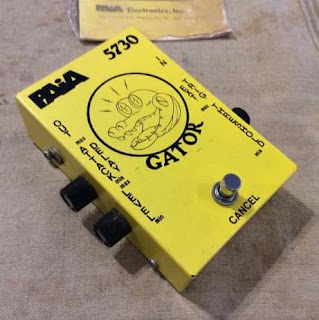 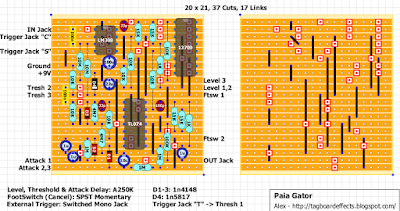 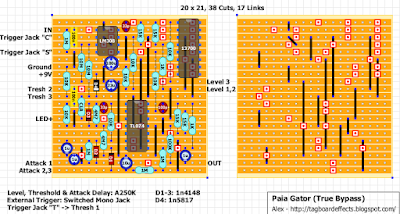 The Tone Reaper is a vintage style fuzz device based on the “3 knob” bender. It’s a silicon/germanium hybrid capable of producing an array of tones from every bender era with careful tweaking of the tone and fuzz controls. From thin and spitty to a growling crunch, all with a midrange punch to make it scratch and kick through any mix. The Tone Reaper will also please anyone looking for the higher gain Randy Rhodes style grind at it’s higher fuzz settings. All analog, true bypass and made one at a time by real humans in stuffy Akron,

Basically it's a modified Tonebender MKIII, with the biggest change being the Germanium darlington pair normally in Q1 & Q2 being replaced with a high gain Sillicon transistor. Thanks goes to Galapagos, who traced his Tone Reaper, schematic and trace here. You'll notice there's a diode he marked mystery, which from what I can tell looks like a 1N4848/1N914, so that may take some experimenting. Also, without knowing the hfe and leakage of the AC176, I can't say for sure what would be a good substitute, but you may want to try the typical NPN Germaniums  typically use like MP38A, but these typically have little to know leakage while the original tonebender Q3 likes a lot of leakage.


Side comment. For those that want to have some more fun, you can build the Tone Reaper and put it in front of a Hoof, each on their own switch and make 2/3 of the Hoof Reaper, as we don't have a schematic for the switchable octave in between.

EDIT: for all those that want to make a Hoof Reaper we have a layout for the octave section, as it's the Tentacle. Build on Brothers of Fuzz.
Posted by Zach at 03:19 76 comments

Here is a very nice sounding distortion by Menatone.
I've drawn 2 layouts:
- with biasing resistors
- with biasing trimmers
I've also added a charge pump for the 18V required.
You can find the schematic on FSB's original thread here.

Original info:
The Menatone None More Black is a homage to all of their favorite high gain amplifiers. Amps with very German sounding names and amps named after Big Rig fuel. While not based on any specific amp, it is an amalgam of the best aspects of many amps rolled up into one. The gain of the None More Black ranges from hot rodded 800, to crazy, in your face, all out insanity. The SUCK knob can take the mid range from all the way gone, to crazy gobs of fat, vocal, goodness, while the PRES gives total control of the high end. This deceptively simple arrangement gives a surprisingly complete control of the tonal palette. 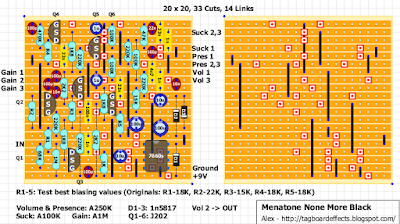 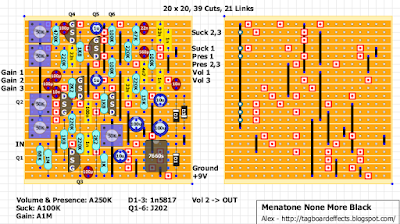 This is a simple silicon Fuzz Face clone with added features.
You can find all the info on their site here.
The original thread with schematic is available on the FSB forum here. 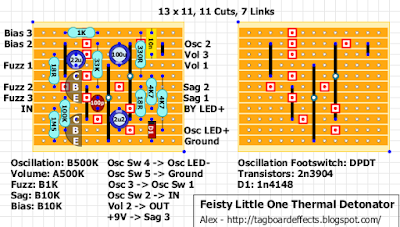 Here is Brian's version of Aron Nelson Smash Drive with added TMB tone stack and recovery JFet buffer.
There are no videos available but you can find info and schematic on Madbean's website here.

This was a request.
It's a diy Marshall emulator designed on Handmades Brasil forum.
You can find the original schematic here. 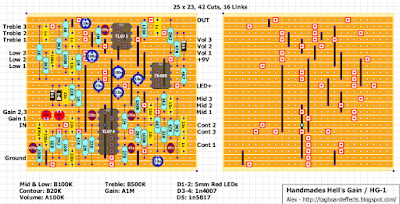