Request, and also for those who want another PT2399 based reverb pedal.  Not one for the faint hearted with that many links and cuts! :o)

One thing you will notice straight away is that this doesn't have the usual 3PDT stomp switching to bypass the effect.  Because it has tails, the stomp will just turn the effect (and LED) off and not mechanically bypass the circuit, so in bypassed mode IC1 will just act as a buffer.  So the input and output wires go straight to the sockets, and only a SPDT stomp is required.

With this being a dual PT2399 build I don't think anyone will want to run it off a battery because if they do it really won't last very long, so this should fit fairly comfortably in a 1590B without making allowances for battery space, and especially with a single pot.

Info from Merlin about his project:

Equinox II: Reverb with Tails
This project came about because I wanted to roll my own reverb. A common way to do this is to use a tapped delay line, but no such chips exist any more. No matter; the result is the same as using multiple delay lines in series and/or parallel. Several DIY reverb effects use the excellent accutronics Belton Digi-Log reverb module, and the associated patent, US8204240, shows that it uses three PT2399 delay chips, one of which is modulated at a slow rate to give a more realistic spring reverb sound. The Accutronics module is not commonly avalable in Britain (also it's cheating to use a ready made effect module!), but I did have a tube full of PT2399s (I absolutely love these chips). I also wondered whether just two could do the job, and it turns out that for guitar use you can indeed get a primitive but usable effect this way. I think this makes the Equinox II the simplest DIY reverb project on the net at the moment!

In the Equinox II the reverb effect is acheived by passing the audio through two delay lines in parallel. One is arranged for a short delay (about 80ms), and the other a long delay (about 250ms). The outputs from each are summed and fed back to the input of the delay lines, and also mixed with the original audio via a mix pot- that's it. (I have an affection for one-knob effects.)

In detail, after passing through the input buffer the guitar signal is sent both to the output mixer and to the JFET analog switch. This switch allows the input to the delay line to be muted, creating bypass with tails (this is exactly the same as my Small Time delay).
Following the JFET the signal then passes through a 15nF capacitor which provides a little bass cut, to stop the reverb getting too muddy, and it then feeds into a second-order high-cut filter. This is also where the output of the delays lines is fed back in.
The output of this filter feeds the short delay line, and also the long delay line (via an unavoidable inverting buffer).
After the signals emerge from the two delay lines they are both summed and filtered again. All this filtering is necessary to reduce noise from the analog-digital-analog conversion inside the ICs.

I spent a long time tweaking the delay times, filtering, feedback, and mixing ratios, to get what I think is the most usable reverb sound using standard component values and the simplest architecture. My first Equinox prototype also had adjustable delay time on the long delay line, and a fat/bright switch. But I didn't find these to be very useful (at anything but the optimum delay time all you get are 'metallic bathroom' type sounds), so I trimmed the circuit down to the bare essentials, creating the Equinox II shown here.

To see more information including the schematic and a PCB for those who want an easier life, check out Merlin's page here, and a clip can be heard here which sounds pretty damn good to me! 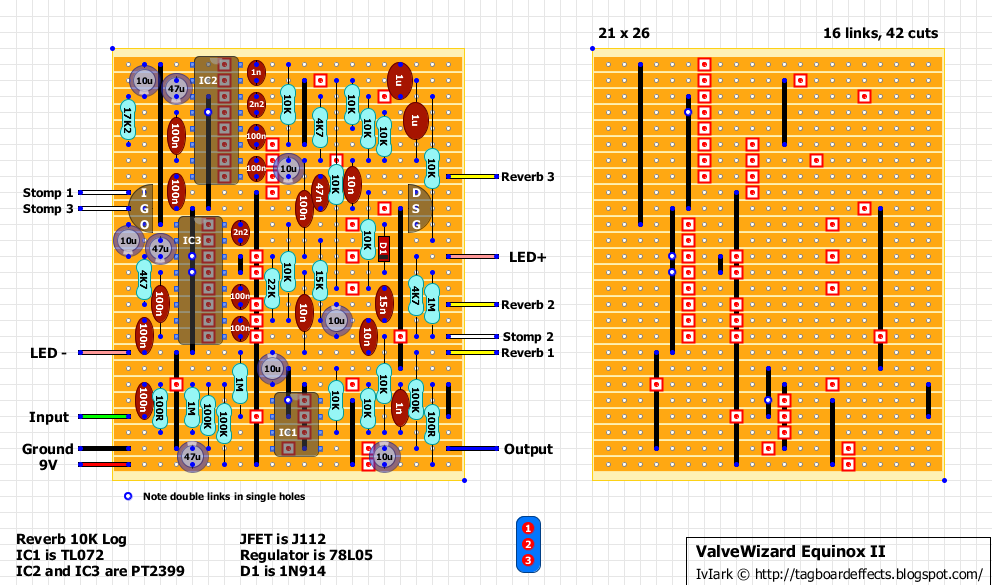 And after discussions below, a version which omits the JFET and instead uses the second pole of the stomp to turn the reverb on and off.  This will also keep tails intact as per the original but because of the parts omitted has removed a link and a couple of cuts and is one column smaller. 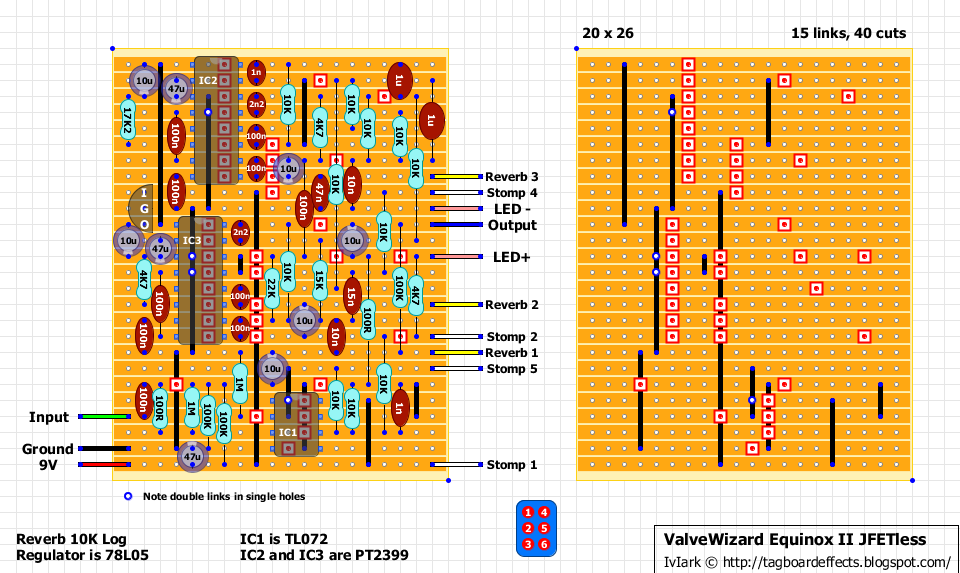