I was surprised I hadn't already posted this one since we've had the schematic for a while.  Iconic and much admired builder to the stars, popular on TGP and everywhere that guitarists want the size of their gear budgets to be known by all.  It sounds pretty good to me.  This includes the famous Cornish Buffer at the input as per the original, but omits the bypass buffer for the usual true bypass switching.   If you do want to make it buffered bypass then you could use the standalone buffer layout as a bypass daughterboard.

The third pole of the 3PDT is used for LED switching.

You could do this with a DPDT stomp just making single connections, but Pete did this using two separate poles to add some redundancy in should one of the contacts fail.

Info from Pete about his original bomb proof effect:

The PETE CORNISH G-2™ has been hailed as the most original sounding distortion unit available to guitarists in the Rock Arena. It features a four stage overdriven discrete transistor Class A circuit with additional Germanium components that generate much warmer sounding harmonics than anything else on the market. Within the huge tone generated by this unit, the original guitar sound and dynamics are present creating a much more musical effect than any other distortion pedal.

The G-2™ gives a higher level of overdrive for that classic cranked up Marshall sound found on most British rock records of the 70s (Led Zeppelin, Free, Bad Company etc.). The G-2™ with its warm Germanium qualities and higher gain starts at around the rhythmic crunch stage of the SS-3™ and continues through in controllable degrees to a rounded but dynamic lead.

The input to this unique device is our universally acclaimed High Impedance, Unity Gain, Class A, Buffer Preamp with it's superior RFI rejecting capability (to eliminate Radio Station interference) and Low Impedance output, allowing the use of extended cable runs from the G-2™ in bypass mode. The fixed High Impedance load presented to the Guitar allows the pickups to operate at their optimum, even when several effects units are connected after the G-2™. The Unity Gain Buffer also prevents "Ghost Distortion" being audible in Bypass Mode. This effect unit gets the most benefit from being fed into a clean, full frequency response amplifier and I recommend that when you receive your pedal you connect it up without anything else in line, just Guitar/Pedal/Amp, and discover the way the controls interact, both with themselves and the guitar/amp controls. Then adding the rest of your effects, you may find that you need to make slight adjustments to these as they are now being fed with a constant signal when the G-2™ is in Bypass Mode. 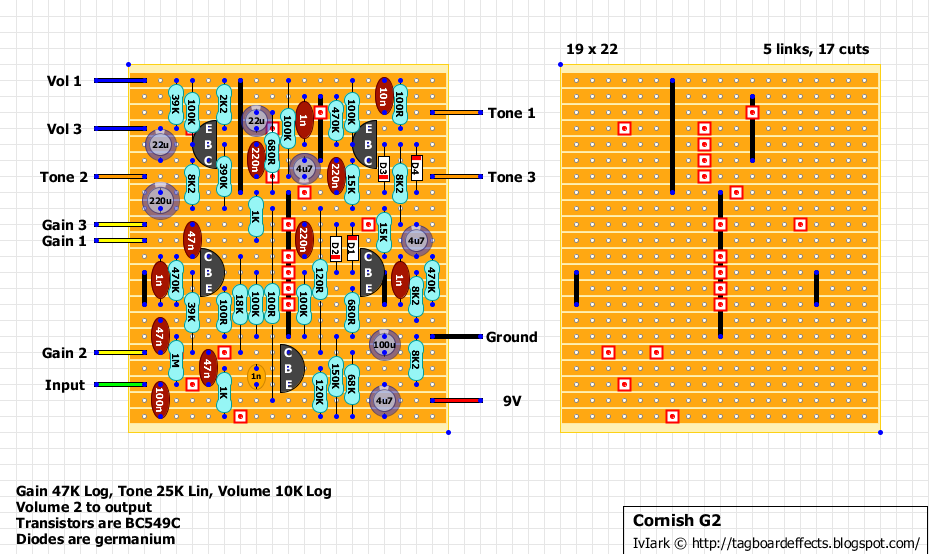 And the wiring diagram for buffered bypass with all the peripheral wiring removed to simplify it.  You can see the first two poles are linked meaning that if a contact on one of the poles fails, then the switching will still work, and so it's adding redundancy.  But you really don't need to do that if you prefer not to, you can just use a DPDT and use a single pole instead of the linked pair. 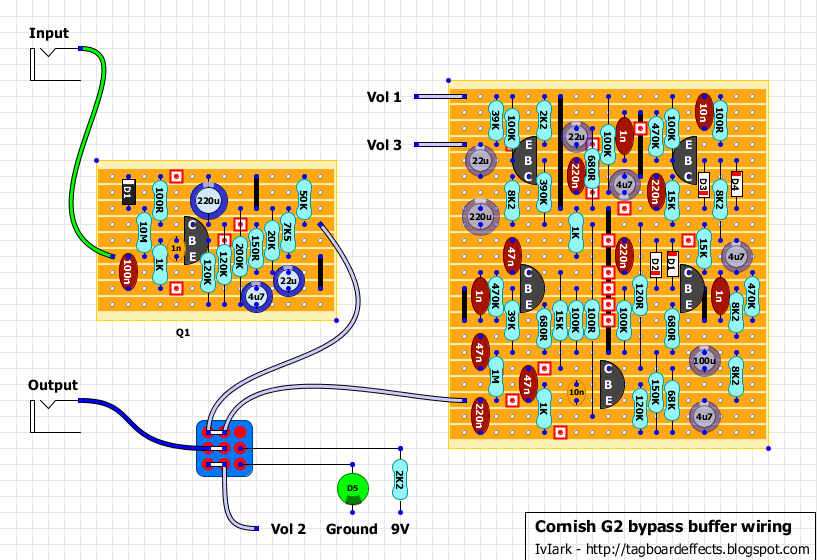