There was a resistor missing from the schematic so the layout has now been fixed. If anyone has already built this then if you can add a 2K resistor somewhere between the germ transistor emitters and ground that should sort it out.  Or you can use then fix layout John did at the bottom of this page.  The main layout has been fixed with an extra column being added to accommodate the resistor

As usual with Bjorn designed stompboxes, a great sounding fuzz.  2N1308s should be available on eBay but if you can't find them, just throw any NPN germaniums in there.

Info about the original:
The Candy Apple Fuzz is one of Bjorns first BJFe circuits (along with the BBOD and DRD) ... it was made to cover the nastier side of vintage fuzzes and it does just that and more … over the years the one recurring request was to make it a bit smoother and more musically manageable ... when it came time for the BearFoot version he did just that by adding a treble control to reign in the rasp as needed… and he also adjusted the circuit to germanium transitors, which are smoother and more musical to most ears ... BUT silicon has its own musicality and many just like the full on unruliness and extra rip of silicon ... now you have a choice as we introduce the original silicon formula CAF ... Silver/Silicon ... Gold/Germanium

And the quick fix for anyone who built using the original layout, the resistor value should be 2K. 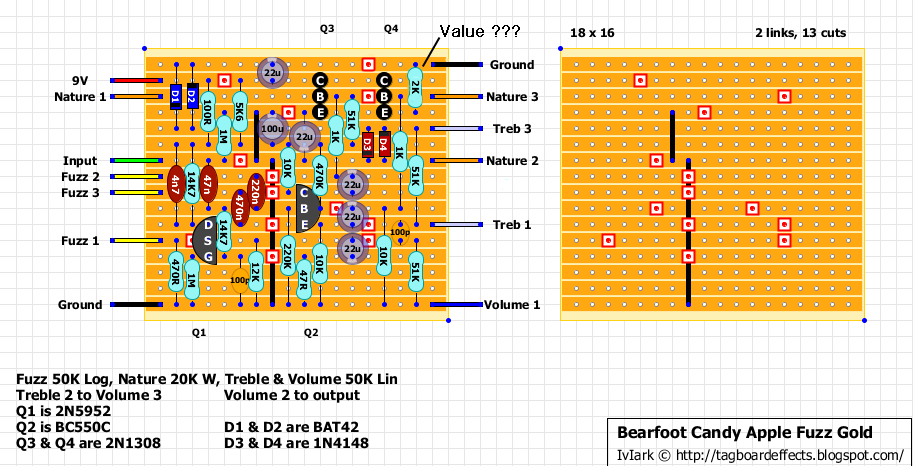